February 24th and 25th 2018 saw a trip to Dorset, to visit Monkey World and Durdle Door.

We started with Monkey World, unfortunately my navigational skills let me down and I got lost on a diversion so was late! Luckily my friend went on in and was able to eat lunch watching the Monkeys.
I haven’t been to Monkey World since I was a kid, but at 32 it did not disappoint!
I went with an adult friend, we didn’t have a child with us, and we had a great time. Unfortunately, due to my navigational fail I didn’t get there in time for any of the talks but would definitely like to go back and spend the day listening about all the monkeys.

The best bit of the trip was watching all the chimps in their enclosure whilst the keepers put food out for them, they are so human like – the Monkeys not the actual humans!
They were swinging around on ropes and there were two who were shuffling around looking like they were on a train!
It was sad to see that many of the Monkeys are rescued from the UK pet industry – Monkeys are not pets people! 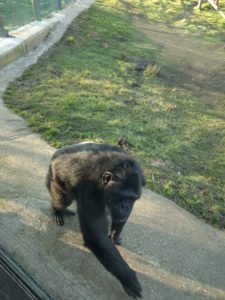 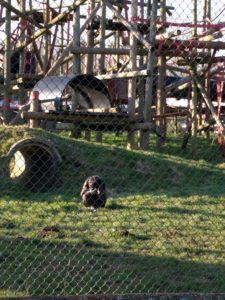 After a trip to the shop and buying some Lemurs for my nieces farm (who doesn’t have Lemurs in their farm?!) we headed to our B&B for the night.

http://www.monkeyworld.org/
We both drove to Monkey World, there was ample parking and it’s then a super quick walk to the entrance.

We stayed at The Black Dog Inn http://www.blackdogbroadmayne.co.uk/
It was clean and the towels were huge and a really powerful shower which is always a winner for me!
Breakfast was nice, we chose to drive into Dorchester for dinner which was about 10/15 minutes away we ate at Cote but there were plenty of choices including Nandos, Zizi’s and local pubs. I feel the accommodation was a little overpriced.

Sunday, we headed to Lulworth Cove, we parked in the car park, it is a little pricey but the money from the car park is used for the up keep of the area including the public toilets – which were very clean and tidy!
We decided to go to Durdle Door first, this is a one mile walk away, the path is at the top of the car park.

I had on what I would describe as normal day to day boots, many people had walking boots, but I hadn’t been very organised!
We had good weather conditions, so the path was okay to walk on I just went a bit slower when I came to the steep going downhill bit!
It was very very windy! There were parts where it took your breath away – take a hair tie!
The view was stunning and as you climb the first hill you can look back over Lulworth Bay.

I have been wanting to go to Durdle Door for ages so was really excited when we came down the hill and saw Durdle Door.
As I said we were really lucky as we had beautiful sunshine, the next weekend the whole of the UK came to a standstill because of snow!
When we sat on the beach out of the wind and our faces in the sun you could almost believe it was summer, apart from the 5 layers of clothes and the only thing getting any sun was a small part of my face! 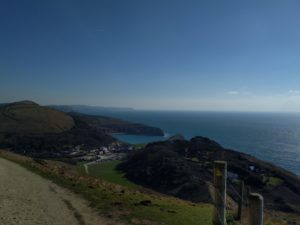 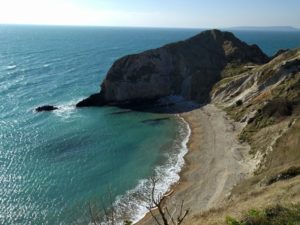 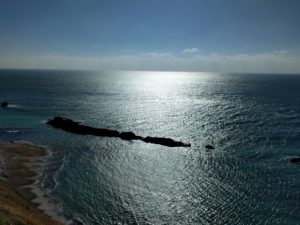 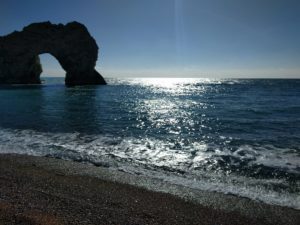 We spent some time wandering along the beach taking photos. We stopped for a snack. We then walked back to Lulworth Cove.

We wandered around Lulworth Cove, we stopped for ice cream and some dinner at the Lulworth Cove Inn, good food, good atmosphere and they catered for my gluten free needs! https://www.lulworth-coveinn.co.uk/

All in all it was a wonderful weekend and Durdle Door did not disappoint! I cannot wait to go back and visit again.

I am Emma and I am the founder of this website.

This website uses cookies to improve your experience while you navigate through the website. Out of these, the cookies that are categorized as necessary are stored on your browser as they are essential for the working of basic functionalities of the website. We also use third-party cookies that help us analyze and understand how you use this website. These cookies will be stored in your browser only with your consent. You also have the option to opt-out of these cookies. But opting out of some of these cookies may affect your browsing experience.
Necessary Always Enabled
Necessary cookies are absolutely essential for the website to function properly. This category only includes cookies that ensures basic functionalities and security features of the website. These cookies do not store any personal information.
Non-necessary
Any cookies that may not be particularly necessary for the website to function and is used specifically to collect user personal data via analytics, ads, other embedded contents are termed as non-necessary cookies. It is mandatory to procure user consent prior to running these cookies on your website.
SAVE & ACCEPT
Social Share Buttons and Icons powered by Ultimatelysocial